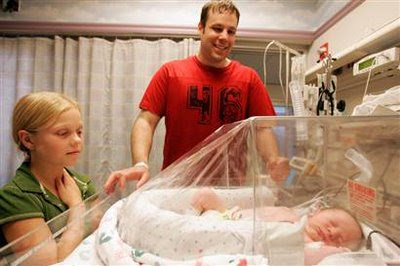 Xander, born at St. Luke’s Hospital in Cedar Rapids, Iowa, is the eighth grandchild for his mother’s parents. And he’s not the only one in his family with an unusual birthday: His 2-year-old brother, Kael, was born on 4/5/06.

Lindsey Hauer thought staff at Lake Region Hospital in Minnesota were joking when they told her the time of her daughter’s birth. And then she got a call from the birthing suite noting Hailey’s weight.

Nurse Jenny Harstad joked that she tried to shrink the baby to 18 inches from her actual 19.5 inches.

Several hospital staff members in Minnesota pledged to buy lottery tickets. And Chad Riniker, Xander’s father, said that eight hadn’t been his lucky number before, but that now he was thinking about buying a lottery ticket.

“I just might,” he said. “If nothing else, with four children I should probably play the lottery.”
at 8:53 PM