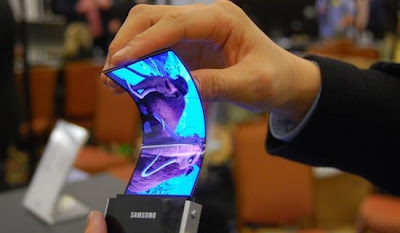 Imagine being able to slide your cell phone or media player into your wallet. Or being able to roll it up like a piece of paper and fit it into the smallest compartment of your backpack. Yes, that day is in the future, but a new AMOLED shown by Samsung shows that the future is coming.
The prototype screen is 4.5-inches and measures a scant .3 mm in depth–so thin that you can barely see it when staring at the edge straight on. It packs WVGA resolution, and according to reports, it can roll up into a cylinder with about a centimeter radius. Samsung already has a working media player prototype with the display and plans to use it in cell phones and tablets once mass production gets underway.
Now, sure, the display isn’t the only hardware that adds depth, but other hardware is getting smaller and thinner too. It’s only a matter of time before we can bend and fold our electronics to fit wherever we want.
at 11:03 PM