'Rock On' at 13 on International Music Chart 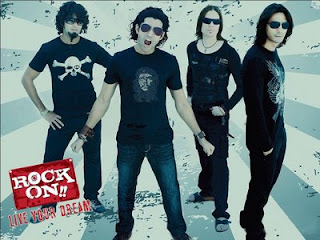 The popularity of "Rock On" climbed a notch higher as its music album stood 13th on last week's iTunes US World Music page.

"The music of 'Rock On' is catching on very well. This is the first time an Indian album has reached so high on iTunes," Kulmeet Makkar, CEO, Big Music and Home Entertainment, told IANS.

The Anil Dhirubhai Ambani Group (ADAG)-promoted Big Music is behind the launch of the film's music.

The film, released on August 29, has been widely lauded for its robust rock soundtrack created by composer trio Shankar-Ehsaan-Loy. It's songs "Pichhle saat dino mein", "Rock on", "Socha hai" and "Sindbad the sailor" are being hummed by youngsters galore.

The fact that it is now among the top 15 albums on iTunes indicates the popularity of the film's music beyond Indian shores.

"The music of 'Rock On' is not typically Indian. It is rock, which is a world genre and it also has a big youth connect," Makkar said.

"iTunes is the number one site for music download abroad and we are very proud that 'Rock On' has made it till there. The fact that the music has been accepted abroad and is doing well is a major boost for us," he added.

Makkar clarified that the earning from the music download from iTunes is not monetarily very profitable, but it proves beneficial in the long run as the platform provides international visibility.

"According to our distribution structure, we distributed the music to 370 online stores across 45 countries. But we still don't consider it a profitable revenue stream. The main revenue streams for the music are ringtones and audio CDs," he added.

Makkar explained that since people in India prefer to download music illegally from Internet sites free rather than paying for it, it is difficult for them to penetrate the Indian online music market.

The sales of the audio CDs have however "become very encouraging", he said.

The music album of "Rock On" has nine soundtracks out of which six have been crooned by filmmaker Farhan Akhtar, who has made his acting debut with the film as well. Apart from Farhan, the film has introduced actresses Prachi Desai and Shahana Goswami.

"Farhan's voice is exceptional and added a lot of authenticity to the songs as he plays a singer in the film. It also makes people feel that even though you may not be a professional singer, you can also sing. Farhan has added honesty to the songs," Makkar said.

Big 92.7 FM, also a part of Reliance ADAG-promoted Reliance Entertainment, has been arranging major on-ground activities to promote the film. One of the highlights is the "Rock On" concert that has already been held in Mumbai, Pune and New Delhi and left the audience wanting more.

Set in Mumbai, "Rock On" has an urban feel and revolves around a group of four aspiring musicians who form a hippie rock band called "Magic".