The Google Android phone is here!

Called the T-Mobile G1, it has both full touch-screen functionality, a QWER 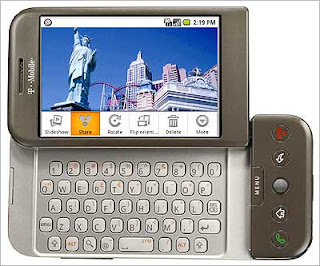 The G1 is available for pre-order now in the US in limited quantities fot T-Mobile registered users.

It will be available in retail stores from October 22, for $179 with a two-year voice and data agreement.

It will be available in the UK beginning November and across Europe in early 2009.

The Android provides the phone's operating system as well as a platform for the phone to run a variety of software programs.

Google wrote Android using open-source software, which means any programmer has access to the source code that makes Android tick and can write software that runs on any mobile phone using Android.

Unlike the iPhone, the G1 features a mini QWERTY keyboard, which is accessed by sliding the touch screen to the side. When the keyboard is used the screen's orientation changes from vertical to horizontal. The G1 can open files created using Microsoft Word and Excel.

Google Maps:
With Google Maps G1 users can instantly view maps and satellite imagery, as well as find local business and get driving directions, all from the phone's easy-to-use touch interface.

Not just this, Google Maps feature syncs with the built-in compass on the phone -- an industry first -- to allow users to view locations and navigate 360 degrees by simply moving the phone with their hand.

Communicating on the go:
The T-Mobile G1 features a rich HTML e-mail client, which seamlessly syncs your e-mail, calendar and contacts from Gmail as well as most other POP3 or IMAP e-mail services.

The T-Mobile G1 multitasks, so you can read a Web page while also downloading your e-mail in the background. It combines Instant Messaging support for Google Talk, as well as AOL, Yahoo! Messenger and Windows Live Messenger in the US.

With access to high-speed Web browsing and a 3-megapixel camera with photo-sharing capabilities, the T-Mobile G1 is ideal for balancing a busy lifestyle.

Embracing user-generated content: Customers can use the G1's 3G and Wi-Fi connection to attach and share pictures over e-mail and MMS or download music from their favorite Web sites. 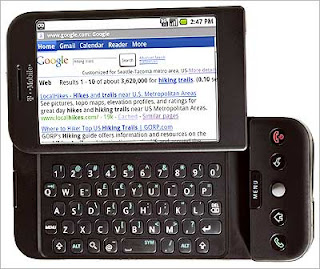 You can't play iTunes music files on the G1. Instead, T-Mobile is offering its own music service through Amazon Music, which gives customers easy access to Amazon MP3, Amazon.com's digital music download store.

The T-Mobile G1 will be the first device with the Amazon MP3 mobile application pre-loaded.

Android market:
The T-Mobile G1 is the first phone to offer access to Android Market.

When the phone launches next month, dozens of unique, first-of-a-kind Android applications will be available for download on Android Market.

Email ThisBlogThis!Share to TwitterShare to FacebookShare to Pinterest
Labels: Google