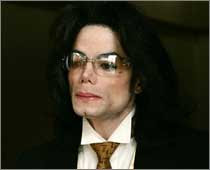 Pop singer Michael Jackson has converted to Islam and changed his name to Mikaeel.

The 50-year-old star, pledged his allegiance to the Koran in a ceremony at a friend's mansion in Los Angeles, the Sun reported.

Jackson sat on the floor wearing a tiny hat after an Imam was summoned to officiate -- days before the singer is due to appear at London's High Court where he is being sued by an Arab Sheik, the paper said.

The star decided to adopt the new religion while he was recording a song at the home of his friend where a Jehovah's witness was brought up to help him through the ceremony.

Apparently the star of hits like 'the Way You Make Me Feel-was convinced by his producer and songwriter friends David Wharnsby and Phillip Bubal.

"They began talking to him about their beliefs, and how they thought they had become better people after they converted. Michael soon began warming to the idea.

"An Imam was summoned from the mosque and Michael went through the shahada, which is the Muslim declaration of belief," the source revealed.

Mikaeel is the name of one of Allah's angels.

"Jacko rejected an alternative name, Mustafa meaning "the chosen one", the source added.

The singer, who rarely ventures out without a mask, is due to give evidence on Monday in a 4.7 million pound lawsuit brought by Prince Abdulla Al-Khalif of Bahrain for defaulting on an exclusive recording contract.
at 11:05 PM